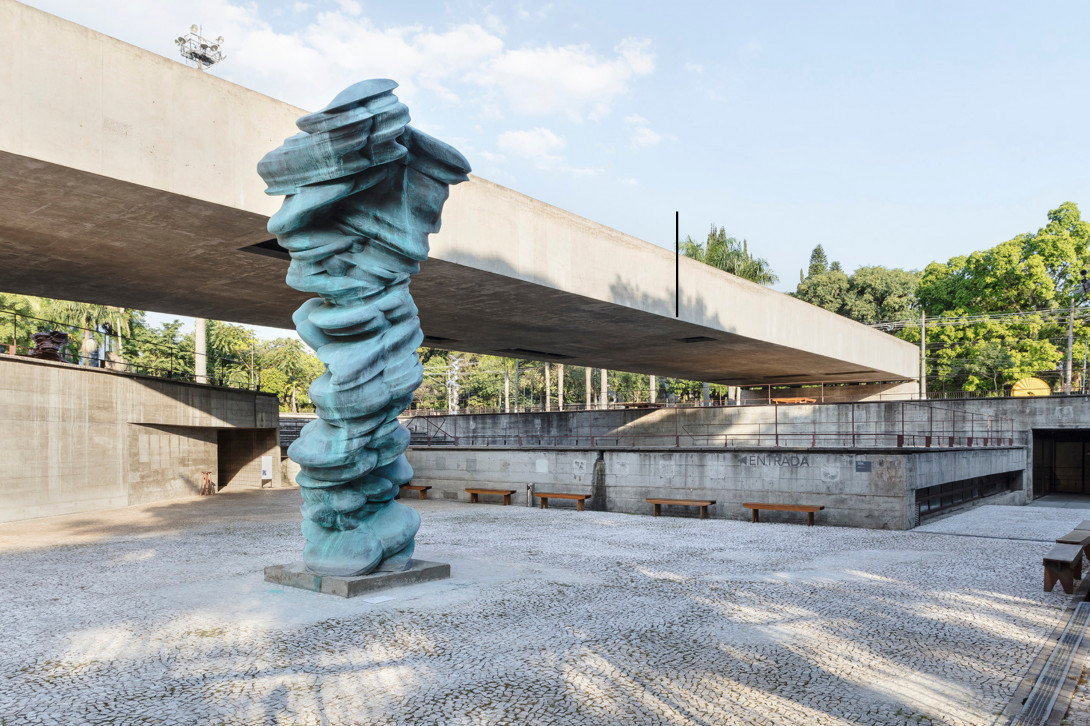 "Besides drawings, the show presented at MuBE features sculptures in wood, bronze, steel, stone, aluminum and glass. His production reveals an intimate relationship between the chosen materials and the final appearance of each piece, even though some strong colors can mislead us.

Shown alongside his drawings – which are themselves a field of exercise for thought – the artist’s threedimensional works gain a history, as though we could see the lines and planes that gave origin to their structures. The drawings, even though they are autonomous artworks in their own right, are a sort of matrix for thinking and also an unfolding of his visual research.

Tony Cragg does not seem to base his work on the opposition between figuration and abstraction. This simplistic division is not sufficient for the experience we have with his work. Even though the human body, familiar objects or imaginary landscapes can be identified in some of his works, his sculptures never lose their original ambiguity. Their titles indicate paths for approaching them, but also open other possibilities, while keeping something indeterminate. The forms of his sculptures are simultaneously natural and artificial, organic and geometric, simple and elaborate.

The show prepared for MuBE, which will travel to other institutions around Brazil, presents a selection that emphasises on works made since the 2000s, but also features fundamental pieces from the 1990s. By presenting one of the most highly acclaimed artists in the world, MuBE is collaborating to enlarge not only the repertoire and perspectives on contemporary sculpture, but also the reflection on the occupation of space.

Tony Cragg works skillfully with sculpture on different scales, ranging from the most monumental, made for external areas, to very small-scale ones measuring just a few centimeters. The present show bears a frank relationship with the architecture of the museum, which was conceived as a public space indissociable from the city. And the pieces by Tony Cragg, in tune with the curatorial line of MuBE, instead of being closed in on themselves, act on the surrounding space and on the entire environment around them."

For more information please visit the website of the museum.