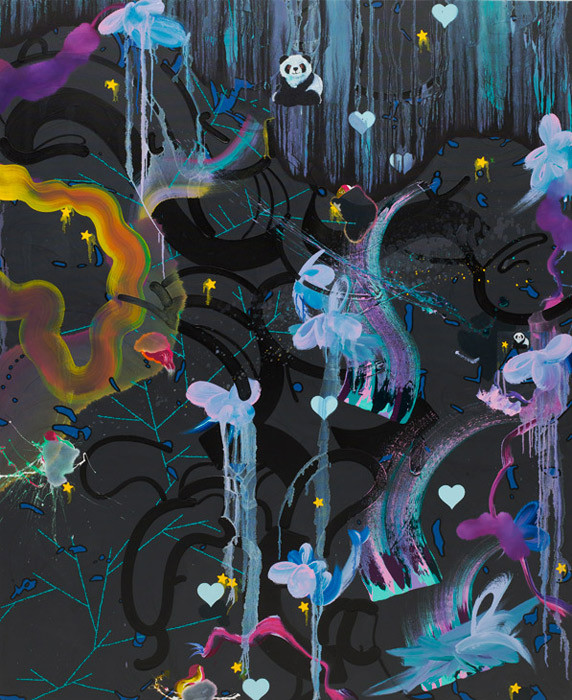 In this exhibition, a survey of Fiona Rae’s output since 2000, seventeen oil and acrylic paintings on canvas—assembled across two rooms in the gallery—draw on everything from the Technicolor of cartoons Rae watched as a child in Hong Kong to images connected with contemporary Asian popular culture, such as pandas, hearts, flowers, and fawns. Indeed, the Young British Artist label often used to describe Rae fails to shed light on her peripatetic upbringing: Prior to moving to the UK with her family, she lived not only in Hong Kong, where she was born, but also in Australia and Indonesia. While Rae is best-known for her frenetic formal mixture of various painting styles—and every smudge, splatter, stain, and spray of paint is visible in the natural light of the gallery’s newly refurbished rooms—her recent output also mines the tension and anxiety produced by cultural signs that are inevitably decontextualized in the global flow of information.

A 2009 work, enigmatically titled Maybe you can live on the moon in the next century—also the exhibition’s title—is emblematic of this new shift. Two pandas float above an indeterminate ground, seeming to appear and disappear amid swirls of colorful paint that suggest movement and circulation—perhaps of information (and maybe even people). Indeed, her work from earlier in the decade, such as the 2000 works Lovesexy and Angel, more explicitly appropriate digital iconography; here such images seem relatively unmoored from their sources. The ambiguous piercing gazes of the pandas evoke just as much a sense of menace as of cloying cuteness; and the push and pull between these two is underscored in the occasional clash between exuberant, romantic colors and moody, dark washes of black. Overall, the work sidesteps both sugarcoating globalization and suggesting there is something inherently sinister about it—a surprising yet exciting new direction for this “British” artist.

Find a link to the article here.